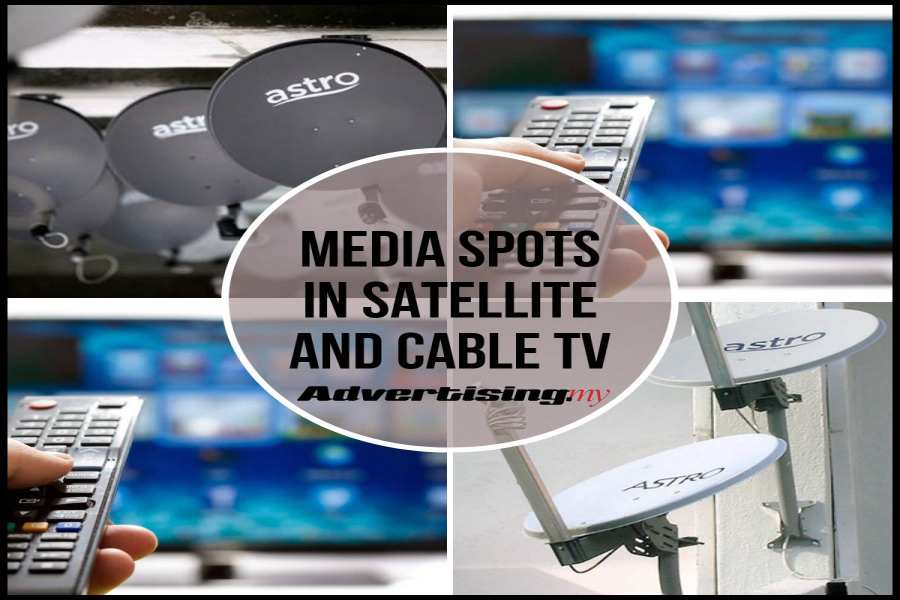 Satellite television services in Malaysia is very common today. Provided by Astro under the Measat Group, it holds about 45% of the total market share among all television viewers. Unlike Free-To-Air TV channels, satellite TV services provide more focused advertising services as they come in different types of programmes which are pre-determined.

Meanwhile, the situation is very similar with Cable TV. In Malaysia, this is provided for under the IPTV (Internet Protocol Television) service with 2 main operators namely HyppTV and ABNXcess. The former is owned and provided by TM under its Unifi (broadband internet) and the latter is the latest addition to offer these services.

If you are planning to advertise in Satellite TV, you will first need to have a focused marketing plan. This is because Astro channels are very specialized where they play specific genre of programmes. It must be noted that the highest viewership of a certain channel in Astro might not necessarily be the media for your campaign as it might be targeted at a totally different audience. Astro Ria is the most watched channel, conjuring up to 50% of the total audience reach while Chinese channels like AEC has about 13% of the total. As such, it is imperative that your campaign has specific customer segment be it sports, entertainment, variety, language and other factors.

Satellite TV media spots are diversified. Through Astro, it is divided into various categories that will target certain audience. Media spaces in these channels are calculated via the duration of your clip that can be in 10, 15, 20, 25, 30, 35, 40, 45, 50 and 60 seconds respectively. Each of the duration will have a separate rate depending on the category. This can start from as low as RM1,000 for a 10 second slot and be up to RM30,000 for a full-minute ad. In terms of segmentation, satellite TV is divided among Chinese,  Malay, English, Indian, Sports, News and Gen Next segments respectively.

In terms of cable television services, there are 2 major operators in Malaysia which are HyppTV and ABNXcess. Similarly to Satellite TV, it will require proper planning for your campaign in order to reach your intended target audience because this is where there are specialized programmes on show on every channel.

Operated by TM under its Unifi broadband internet access services, there are all types of channels available through this operator. It is divided into 3 major categories and the genres like Lifestyle, Entertainment, Asian/Local, Learning, Sports, Kids, Chinese and News, all of which have their set of channels and services. Programmes are played 24-hours a day, throughout the whole year which means that your ad will be seen at any time during the day. In HyppTV, you will be given 2 major types of media spots which are prime time and fringe time.

HyppTV is highly impactful and effective for your campaign if you are targeting television viewers. To advertise through this operator, you will need to choose the categories based on the time slot. The common duration of each ad is 30 seconds. In Category A, the rate is between RM3,000 and RM4,500 while Category B is between RM2,000 and RM3,500. For Category C, rates start from as low as RM1,200 and goes up to RM2,500 for every spot.