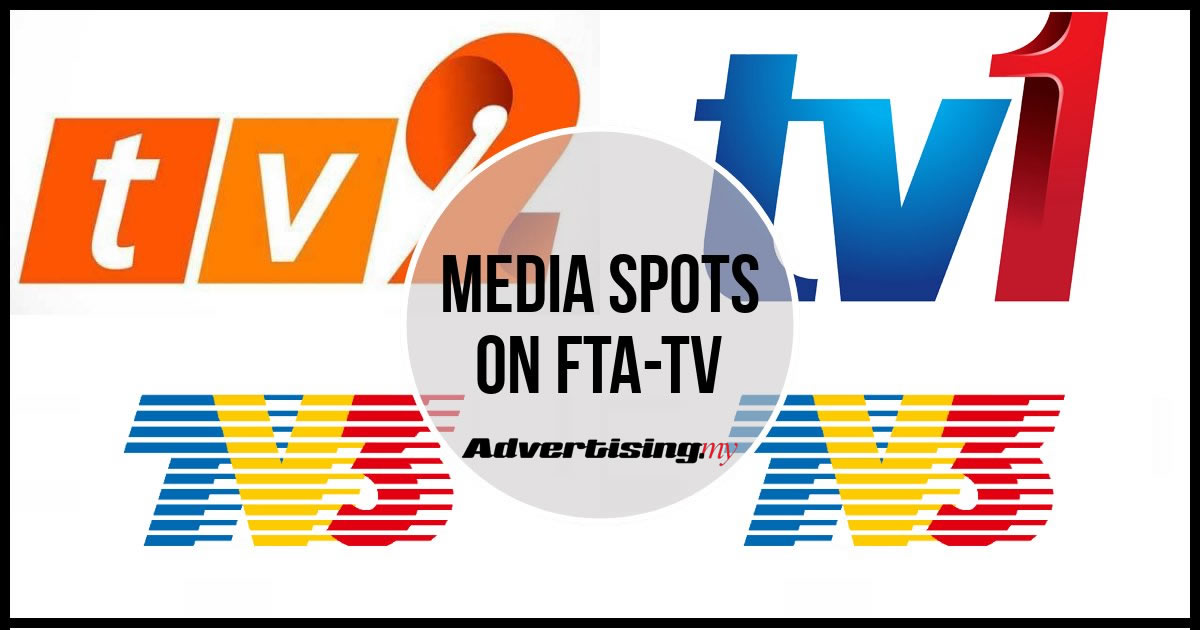 Television is one of the oldest and perhaps most popular media used for advertising. In Malaysia, this media is regulated by the government of Malaysia which stipulates that there can be a maximum of 10 minutes of advertising time for every hour per channel. There are 2 main categories involved in TV advertising which are FTA (Free-To-Air) and Format TV channels. The former is operated by Media Prima which owns TV3, NVT7, 8TV  and TV9 while RTM operates TV1 and TV2. Format TV channels meanwhile is run by 3 main operators namely Astro, HyppTV (via TM) and ABNxcess.

There are in general 2 types of formats possible for advertising in FTA TV channels namely Slides and Filmlets. For RTM and Media Prima, the specifications for Slides are 7, 10, 15 and 20 second for TV1 and TV2 while it is 7, 10 and 15 seconds for Media Prima channels. Meanwhile, for Filmlet, it is 15, 20, 30, 40 and 60 seconds for TV1 and TV2 and 10, 15, 20 30 and 60 for all Media Prima channels. In this case, slides are cheaper than filmlet mainly because of the quality of the output as well as their effectiveness sin conveying the message to create the impact of the ad.

The media spots in RTM channels are very diversified with many options. This is because RTM channels are available across the country. As such, media spots in these channels are clearly divided among the different zones and format. There are in total 21 zones available to choose from in TV1 and TV2 channels respectively with A being the most widely watched while U has the least audience. From there, it is then further divided between slides and filmlet formats. Naturally, the longer the duration, the more expensive the spot will be.

Rate: The lowest media spot in RTM channels is about RM100 for a 7-second slide and it can then go up to about RM20,000 for a long filmlet in zone A.

Advertising in channels operated by Media Prima is slightly more challenging as each channel (TV3, NTV7, 8TV and TV9) are specifically targeted to certain viewers. Similarly to TV1 and TV2, it is divided between the 2 formats with slides being cheaper as compared to filmlet.

Rate: For TV3, it starts from RM400 for a 10-second slide ad while it ranges between RM1,000 and RM3,000 for different duration of filmlets. For NTV7, the range starts from RM250 to RM2,000 while 8TV and TV9 spots are about the same as well. It must be noted that these are known as base rates which means that it can differ according to the timeslot of the programme and other configurations like sponsored programmes, events and festivals.